I’ve seen some odd crossovers but this may very well be the strangest yet… This is a very unique combination of worlds in the geek and horror universe!

The year 1990 saw the release of Predator 2 in the movie theater. Towards the end we were treated with a super cool scene in which the camera slowly pans over a small closet filled with different skull trophies that the Predators had taken. One of the skulls was an Alien skull. Yes, as in the same monster from the movie Alien (and it’s sequels).

BUT.. Did you know that this was not the 1st time these two creatures had a crossover? In 1989 (November and December) we saw two issues of a Dark Horse Presents comic (issues #34 and #35) that each detailed out a separate story line, issue #34 for Aliens and issue #35 for Predator. In February, 1990, issue #36 came out and so began the 1st official crossover. Aliens Vs Predator soon became a major deal (and I like to believe that it is because of these comics that we saw that Alien’s skull in Predator 2) in the geek world and it spread like wildfire.

Soon AvP comics were everywhere and the what if scenarios seemed to have no end.

Aliens vs Predator was successful, to put it mildly. On it’s heals came many other crossovers; Superman and Batman vs Aliens and Predator, Aliens vs Predator vs The Terminator, no to mention the countless AvP spin-off comics. There have even been popular fan man videos of Batman vs Predator (Batman: Dead End look it up) posted on Youtube. To say that we hunger for this franchise would be an understatement.

Okay, enough history.. On to the review!

I was cruising through my local bookstore (sadly we do not have a comic shop where I live) and I chanced across issue 3 of Archie vs Predator from Dark Horse Comics. What in the world is this? Is this THE Archie that we all know and love? Is this THE Predator that we all know of Arnold Schwarzenegger’s 1987 movie? Yes.. and.. Yes, indeed!

How can this be? I mean, this idea is absurd (in a good geek way)! It makes no sense! Archie comics have been around since the late 1930’s and a crossover like this just makes no sense (in a thrilling I’ve never thought about this before kind of way)!

I HAD to have it. I thumbed through and found issues 1 and 2 and bought them all right there on the spot. I really wanted to do a review of each one, but since this is a 4 issue series I decided to compact my review into 1 post. I also decided to go a different route with this write up. Normally I would detail out what happens in each comic, but I decided to gloss over the story itself (I mean.. that’s the whole point of this review is to get you interested in buying them to read) and detail our some of the finer points of the comics themselves.

I really don’t want to give out any spoilers, but I will give a little info about each issue. You can also click on each cover to link directly to Dark Horse Comic’s page to read more about each issue (or you can hit up your local comic shop if you have one).

In each issue; Alex de Campi did the script with Fernando Ruiz doing the penciling, Rich Koslowski did the inking with Jason Millet doing the colors and John Workman doing the lettering. 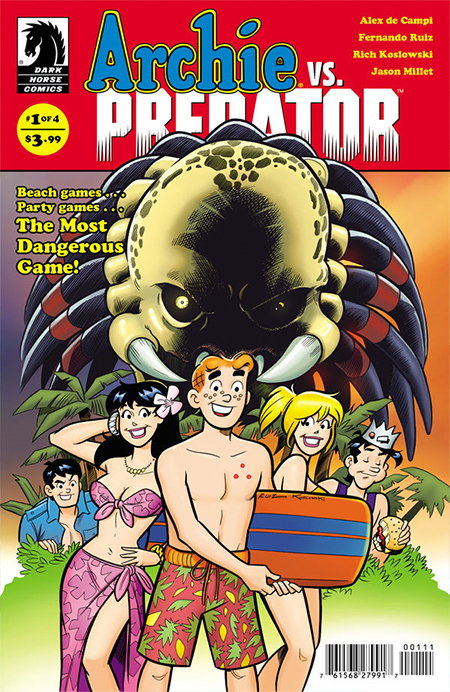 This issue was released in April of 2015, it runs just over 20 pages. Spring Break is here and the gang is trying to figure out what to do. Jughead busts open a bag of Tayto-Chips and the gang has won a free tropical vacation to Los Perdidos Resort. Okay, I need to pause here. Once on the island, as you can imagine, things go wrong for our gang. As mentioned I really do not want to give away the storyline so I’ll stop right here, however… Los Perdidos… It means The Lost. Now, what’s REALLY cool about these 4 issues are all of the Easter Eggs hidden within!

Examine the pages of each issue closely and see how many you can find! 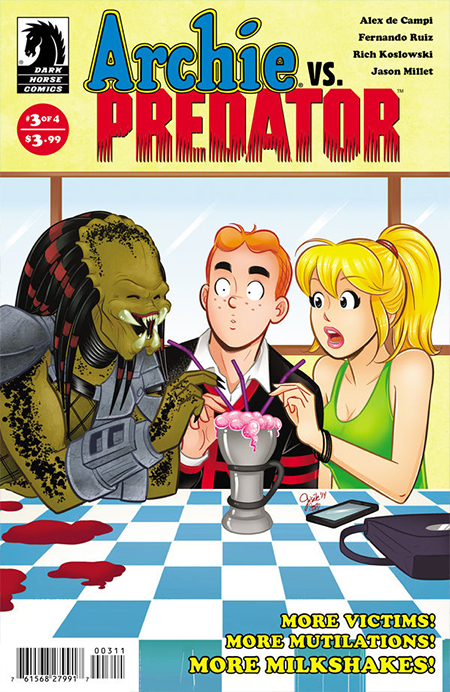 The cover says: Back in Riverdale, safe and sound!

This issue was released in May of 2015 and has just over 20 pages. Again, no spoilers but I will say that the death toll continues to rise! Sabrina the Teenage Witch is in this issue and speaks some words of Cthulhu origin. We learn that evidently Predators are known by some of the people in the Archie world and have been known for quite some time. Listen, the artwork here is fantastic, the pages are bright and colorful and slick. The adventure continues into… 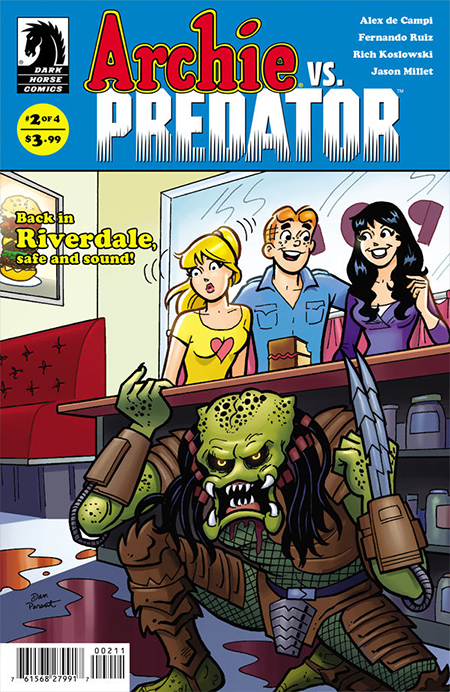 This issue was released in June of 2015 and has just over 20 pages. Don’t let the cover fool you. The Predator is not a friendly being and the death count continues to grow. Speaking of covers.. for collectors there are a few different variant covers out there of each issue (as I have detailed out). Some are a bit darker than the whimsical ones I am presenting to you here. 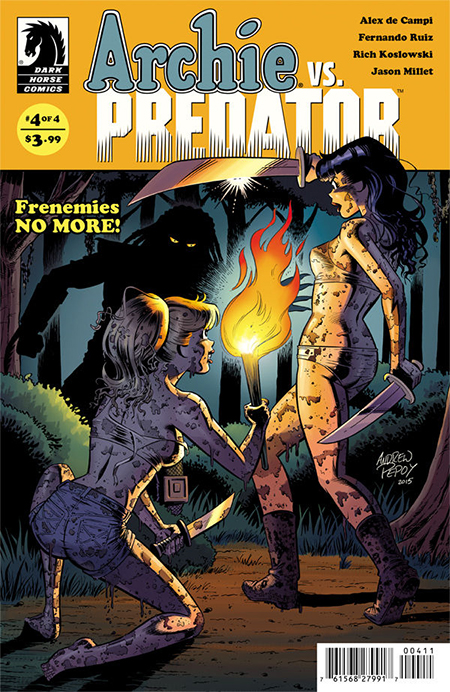 The cover says: Frenemies No More!

This issue came out Today, July 22nd (2015) and has just over 20 pages. This issue is the final one in a 4 part series. It is also chock full of action and mayhem! Pay real close attention to panel 1 on page 4. There are some throwbacks to earlier Archie comic crossovers (more Easter Eggs alluded to in my Issue 1 portion up above).

I really have nothing more to add. This was a rip roaring fun and insane crossover, something I’m very pleased with running across. I cannot recommend this 4 part series enough. If for any other reason just to have it to collect. 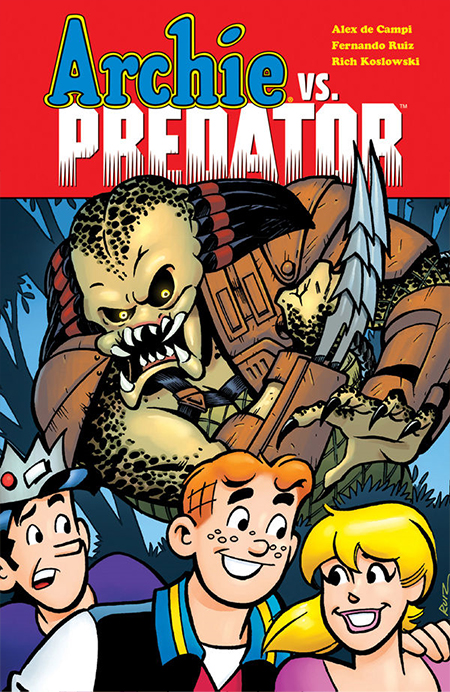 Due out in November of this year (2015) is a special Hard Cover edition… If you head over to Dark Horse Comics now (you will actually be directed over to Things From Another World – a great place to buy comics online), you can pro-order it for only $15.99! As soon as payday hits, I’m pre-ordering one for myself!

That’s it folks! Bottom line is.. check this comic out! It’s a quality comic done up right on quality paper, it has a solid story and is just plain old fashioned comic book fun! Buy it!

Now.. if I can just figure out a way to convince Dark Horse Comics to entertain a pitch I have for my comic book…