Vampires, like almost any entity, can be both good or evil and in most cases, both. It depends on the mood of the vampire to be totally honest. However, when you run across a truly evil vampire you need a very evil vampire stake to do the job.

Let me tell you about Graine…

Years ago (and by years I mean a long damn time ago) there was a wizard (yes, wizards do – or did – exist) that burned down a tavern leaving no survivors. He threw up a magical barrier preventing anyone from escaping and keeping anyone who would run in to help – out. The flames illuminated the evening with an unnatural light.

When the sun began to slowly creep into the darkness only a small handful of lumber from the tavern remained, the rest was a pile of smoking ash.

Over the years the town tried to rebuild, but every building attempted to be reconstructed upon that location where the tavern was, met the same demise – unnatural flames burning it to the ground.

No one knows what happened to Graine. Some say he was tracked down and dealt with, others say he transcended to a different plane of existence. For all I know he may still live among us…

Regardless of Graine, me being an opportunist, I scavenged some of the wood from that tavern and turned it into vampire stakes.

This vampire stake is just as full of the evil that Graine was, though it is cool to the touch and won’t burst into flame, I must suppose that it contains some of the latent power from all of those years ago..

I present to you.. the vampire stake known as Graine. 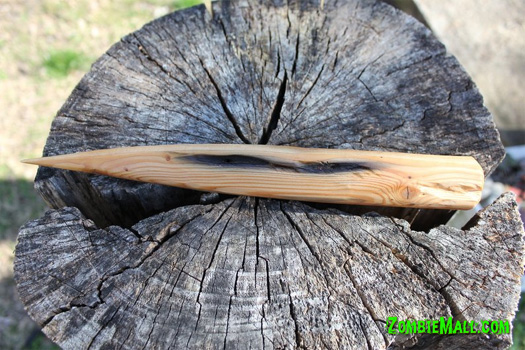 You are looking at Graine. Graine is a hand carved, wooden vampire stake. The vampire stakes that I make all come from either dead limbs, fallen trees, or reclaimed wood. All are hand carved and each one takes on a shape and personality unique to itself.