What I can say, is that back in 1822 when I helped break ground at where  Zombie University now stands, I encountered a vampire that claimed he was turned back in the year 1231!  Now listen, this guy was not in good shape.  The years had not been kind to him, but to be honest, he also admitted that he was a total slouch.  I don’t care what you have been told, vampires do pump blood through their veins and we need to do cardio just as much as the next to stay in shape, but this vampire..

He was soft and plump and “bulby”.  What I mean to say is, he was gross.  Open sores, dark bruises, and he stank!  But, who am I to judge.  What I can do, however, is create a vampire stake that is specific to dispatching him..

I made the vampire stake known as Slug specifically for that vampire, well, to “take care of him”.  If you happen to run into a very slothful vampire, one that can barely move, you defiantly want Slug on your side… 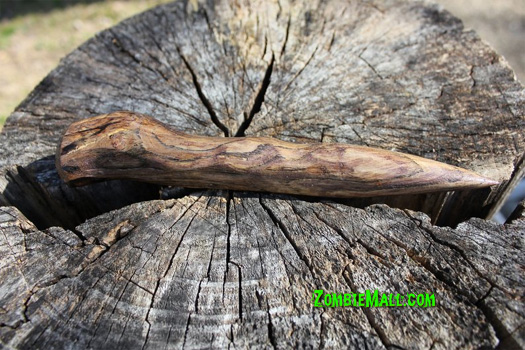 You are looking at Slug. Slug is a hand carved, wooden vampire stake. The vampire stakes that I make all come from either dead limbs, fallen trees, or reclaimed wood. All are hand carved and each one takes on a shape and personality unique to itself.