Honestly, I had totally forgotten that Fear the Walking Dead was returning last night. That’s my fault, really. I’ve been busy with school starting back up, trying to work, and life in general. Not to mention that I’m still wrapped up in it’s original The Walking Dead and wondering who is going out for the baseball team…

This episode, called Grotesque, is the 1st episode of it’s 2nd half of the 2nd season (hence the S2.E8).
It’s all about Nick. I get that it’s a character development episode, but it spends it’s entire 47 minutes following him around as he walks around Mexico.

Now that that’s #established, let’s go back to..

See, the thing is, with FtWD.. While I see what they are trying to do with this episode, I’m still stuck on the season 6 finale of it’s main show, The Walking Dead. I think it would have been a wiser move to start up this second half of the second season with something as equally gripping. Yeah, I get that we’ve had 6 full seasons to get attached to our Walking Dead characters, and only 1.5 seasons to get attached to our Fear the Walking Dead characters, but still. 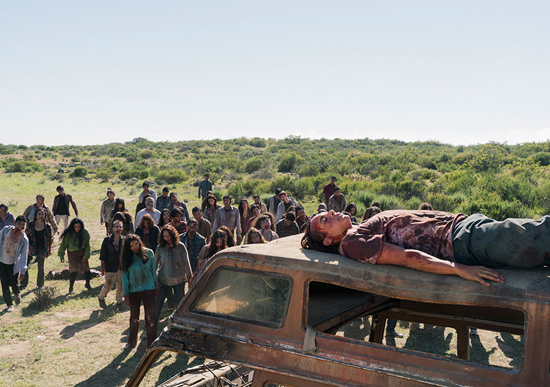 I’m torn. I liked the episode, but the parent show is still overpowering my judgement. It’s difficult for me to see this spin-off as it’s own entity, I keep looking for how the two shows are going to tie together. Of course, I’m also still watching to see how they can further connect the Walking Dead universe to Breaking Bad universe.

As an episode, Grotesque was actually pretty good. I know I’ve complained a little here, but that’s my own hang up getting in the way. I actually like this spin-off. This episode really delves into Nick as a character and drives home how he really is made to survive in this new zombie world. While it mostly just shows Nick walking around, we get a couple of hints into his past and his pain. We are shown a little of what makes him who he is.

It’s obvious to me that Nick doesn’t operate well with the living but how he navigates around with the dead; wow. He doesn’t fear the dead, and has a very unique way to navigate them.

What I am most interested in is seeing specifically where Nick is 10 years down the road.