I can’t bring myself to eat the newest Burger King creation, the Whopperrito. 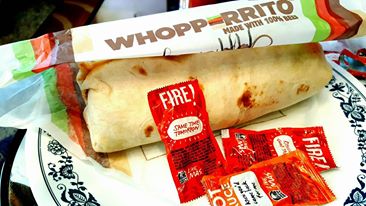 I know I will eventually, simply because of the fad of it.  For now, however, I’m letting my friend from Tiki Bar Music, Paul, try it first.  He did tell me that eating it just as it comes isn’t the correct way.  When I further pressed him on exactly how one is supposed to navigate this Tex-Mex-Whopper hybrid, he said this:

I asked for extra ‘creamy queso’. The item you are referring to. I didn’t taste any or see any, so I’m not sure it was on there. Either way, it basically tastes like a Whopper wrapped in a soft tortilla. I had an Arsenal ready. Fire sauce from Taco Bell. Hot mustard from McDonald’s. Sriracha. Tabasco. And sweet and sour sauce. Until this moment, I forgot about sour cream as an option. Although it is now already eaten. Oh, I also had some zesty onion ring sauce from Burger King.

I found the best combination to be Fire Sauce with sriracha. Or, fire sauce with zesty onion ring sauce. Or McDonald’s hot mustard sauce, with zesty onion ring sauce and sriracha. Each of them by themselves, weren’t anything special. Would I get it again? Probably not, but there’s hardly been anything that they’ve made outside of the classic menu, that’s been worthwhile, including the hot dogs because of the cost of them. Nothing special at all…
Putting the queso on and having raw jalapenos, might have done it a little bit of justice. But the problem is that, when all is said and done, it’s a flame broiled burger taste. Nothing like Mexican.

I dunno.  I may have to run out tonight and get one for dinner.  I had actually planned on eating a simple salad with some Italian dressing on it, but now.. Now I might just try this instead…